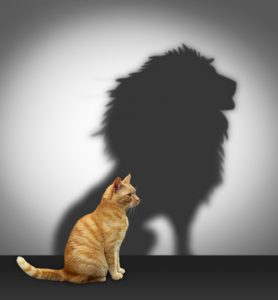 I’m sure someone has told you that perception is reality. It isn’t. This popular platitude is harmful and destructive. It is philosophically and logically false. It’s usually spoken by one person who wants another person to change something, but realizing that the “reality” doesn’t justifiably need to be changed, then the request is reframed to ask the person to change something that she likely has no control over. It is simply an ad hominem attack.

There are two kinds of things that we commonly refer to as facts; one is an objective, reality-rooted fact; another is a subjective, bias-rooted quasi-fact. For example, let’s say that a man named Bob robs a bank. Jim is arrested for the robbery. Jim did not do it. That is the objective fact, even if it is difficult to prove. Three witnesses who were in the bank identify Jim as the robber. That is their perception. Their perception is a lie that they have told themselves, based on inaccurate recollections of an emotionally-charged circumstance. They truly believe it, but it is a subjective perception. Their perception is not based on anything Jim did, and Jim has very little control over it. It is based on the witnesses’ own inherent cognitive biases, it is perhaps based on work that the prosecutor has done to influence and strengthen this emotional perception, it is based on a similar appearance between Jim and Bob, but it is not based on truth. Their perception, as strong and unmovable as it may be, is not reality.

What’s more, Jim has very little, if anything, that he can do to change this false perception. The more he pleads his innocence, the more the witnesses become entrenched in their false belief. They tell themselves, “That’s exactly what a guilty person would say,” ignoring the fact that it is also what an innocent person would say.

The perception that Jim is the robber is an inaccurate belief and Jim is powerless to change this “perception.” Even if he is later found innocent at trial, it will not be because everyone believes he is innocent, it will be because they don’t believe he is guilty “beyond any reasonable doubt.” It will always be perceived by many that he was a robber who got away with it. But, alas, perception is not reality.

Perception is influenced by subjective bias, and therefore it is usually beyond the control of anyone except the one who is perceiving. We can point out biases, but if a person is too emotionally or cognitively predisposed to believe the false belief, we are powerless to alter the perception.

Miscommunications occur that can usually be clarified. Jane tells Jill that she loves Jill’s husband. Jill lashes out at gold-digger Jane. Jill’s perception is that Jane is after her husband, but Jane was merely expressing her admiration for such a good man, with no amorous intent or meaning. This is simply a miscommunication, and hopefully Jane can explain to Jill what she actually meant.

Now while Jane contributed to Jill’s reaction by choosing to use the word love, Jane is still not to blame for Jill’s reaction. Jill is. Why didn’t Jill calmly ask for clarification? Why was she predisposed to assume the worst? What past events and current emotional environment fueled Jill’s biased interpretation? The main problem still lies with Jill. Jane can handle the situation through explanation and clarification (she might even apologize even though she did nothing wrong), but the main problem is with Jill. Jane may not have any contextual understanding of why Jill would react in such a way (maybe Jill has suspected that Jack has been cheating on her for years). But ultimately Jill is responsible for her own biased, emotional reaction – not Jane; and Jill’s perception of Jane is not reality, no matter how strongly or emotionally she might believe it.

Misinterpretations occur, both misinterpretations of intent or motive and misinterpretations of a situation. Let’s say that Bill is a concealed carry permit holder. He’s watching a movie when a gunman enters the theater and starts shooting. Bill draws his gun and kills the shooter. Just then, a policeman comes in and sees Bill holding a gun over the dead man’s body. Obviously this is an easy situation to misinterpret, and it would be hard to criticize the police offer’s potentially false perception of Bill’s intent at that moment. This situation will necessarily resolve itself quickly and the only mistake that Bill can make is not doing exactly as the police officer tells him to. But less extreme examples occur every day, and often there is no opportunity for resolution. One person misinterprets the intentions of another and then doesn’t ask for clarification, instead acting passive-aggressively. The person who was misperceived doesn’t have the opportunity to clarify because she is unaware that she was misperceived. By lunchtime, everyone in the office but her has heard the false-perception presented as fact (via gossip). But a false perception doesn’t make reality. Perception is not reality, no matter how many times someone repeats the cliché.

Why do people misperceive?

Note that in all of these situations, the problem lies with the person who has the false perception, not the person being falsely perceived. In none of these examples does perception equal reality.

If someone has ever told you that perception equals reality, what did he really mean? He really meant that he doesn’t care about reality and therefore rejects honest and productive ways of determining that reality. Instead, he would like to substitute his flawed perception of reality, and this is usually negative towards you. The goal is to shift responsibility. The guilty party is the perceiver and the victim is the one being falsely perceived; but this method allows the perceiver (let’s call him the Bully) to blame the victim; even if the victim did nothing wrong, it is still the victim’s fault in the mind of the Bully for “giving him” the perception that something wrong was done.

We don’t give people perceptions; people have perceptions. If a person with poor vision can’t see the leaves of a tree, it’s not the tree’s fault; the tree doesn’t need to grow bigger leaves, the person needs to get glasses.

Next time someone tells you that perception is reality, explore what cognitive and affective biases this Bully has that might be altering his sense of reality. Don’t tolerate blaming and fault-shifting. Demand substance or silence.