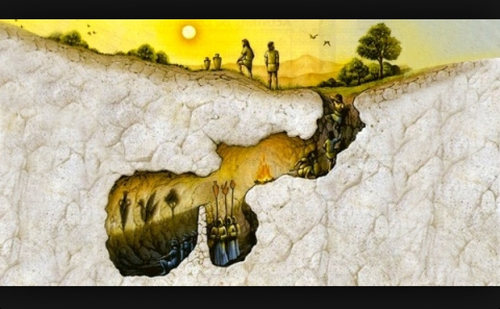 The perpetuators of Scientism are obviously “Scientists” themselves. Scientists, in the Scientism sense of the term, do not believe that they are subject to the problems of other humans, such as cognitive dissonance. Bill Nye, one of the high priests of Scientism, shows this characteristic well, as demonstrated in this piece by Scott Adams.  He sees cognitive bias and cognitive dissonance in others, he sees an explanation of why others can ignore “facts” and rationalize the world to fit their own narrative, but he cannot allow for the possibility that he might do this himself. In fact, he defines cognitive dissonance with his own example better than any other example you might imagine.

Bill Nye is the perfect example of Scientism.

As a Scientismist, Nye believes that he is uninfluenced by anything but the “facts” themselves that are set before him. He, therefore, is not biased. His science is pure, not subject to preexisting beliefs, not subordinated to philosophy but superior to philosophy. This belief leads to the worst form of cognitive bias and dissonance, because it causes the believer to be incapable of any awareness that he might be subverted by bias.

“Science” went down this perverse pathway when it attempted to distinguish itself from philosophy as a discipline. Science might be better called “Natural Philosophy,” as it once was. The realization and understanding that science has philosophical underpinnings and dependency is key to preventing the type of extremism and irrationality revealed in the thought processes of folks like Bill Nye.

Plato’s Allegory of the Cave is a metaphor for many things, but it is an appropriate metaphor for the cognitive dissonance invoked among Scientismists. Those prisoners strapped to the wall, staring at the cave wall, could not accept the reality they were confronted with by the Philosopher who obtained a greater understanding. The cognitive dissonance they experienced led them to rationalize the world they were used to and irrationally deny reality.

As they sat chained down, staring at the shadows on the blank cave, Plato records Socrates telling Glaucon,

At first, when any of them is liberated and compelled suddenly to stand up and turn his neck round and walk and look towards the light, he will suffer sharp pains; the glare will distress him, and he will be unable to see the realities of which in his former state he had seen the shadows; and then conceive some one saying to him, that what he saw before was an illusion, but that now, when he is approaching nearer to being and his eye is turned towards more real existence, he has a clearer vision, -what will be his reply? And you may further imagine that his instructor is pointing to the objects as they pass and requiring him to name them, — will he not be perplexed? Will he not fancy that the shadows which he formerly saw are truer than the objects which are now shown to him?

They experienced cognitive dissonance. They considered as more true the shadows on the wall than the actual reality that was a source of the shadows. They could not depart from explaining their world according to the narrative that had heretofore defined their existence. Their egos could not allow the departure. The rejected a greater truth.

But notice what else happens. The prisoners are scientists. They believe in the data (the shadows) that are before them, undistracted by the context provided by the reality behind them. They are empiricists. Empiricism is the theory of epistemology that underlies modern scienticism and the scientific theory. It is an incomplete and crippled theory of epistemology, but it is important to understand its limitations. Since empiricism accepts as an initial tenet the idea that knowledge comes primarily from sensory experiences, then therein lies its limitation: each person’s sensory experiences are influenced by the context of their lives.

Pascal described each person’s sensory experiences as being filtered through lenses or glasses. Jeffreys called this the Mind Projection Fallacy (and I tend to favor this description). Modern psychologists call this bias. But note well the point: the essential feature of the philosophical origins of the scientific method is that science is limited by the limitations of our perceptions: our biases, our blindspots, our cognitive disabilities.

What happened to the prisoners in the Cave? They weren’t restrained by physical chains, they were restrained by intellectual chains. They had no awareness of their limitations. They believed that they were excelling at recognizing and categorizing and quantifying the reality around them by focusing on the empiric facts in front of them, all the while ignoring the alternative hypotheses and explanations of the observed data and the greater truth behind them, physically and intellectually fighting against reality, struggling to the bitter end to redefine all of the data into a narrative that described the world they already believed in.

And if he is compelled to look straight at the light, will he not have a pain in his eyes which will make him turn away and take in the objects of vision which he can see, and which he will conceive to be in reality clearer than the things which are now being shown to him? … And suppose once more, that he is reluctantly dragged up a steep and rugged ascent, and held fast until he’s forced into the presence of the sun himself, is he not likely to be pained and irritated? When he approaches the light his eyes will be dazzled, and he will not be able to see anything at all of what are now called realities.

This happens every day. This is cognitive dissonance.

But allow me to make one additional extension: the empiricist, chained to the cave, observing the data that’s right in front of him, preaching that he lets the data speak for themselves – this person is analogous to the modern day Frequentist. The Frequentist only looks at the data that is contained within the experiment or project right in front of him, not allowing all the other knowledge in the world to influence the results of the study. The Frequentist claims that this makes for more pure, “empiric” science, free of bias, etc. But in so claiming, this great mistake of hubris is made. The empiricist thus takes an experiment in which a ball thrown out a window but falling to the sky as evidence that gravity is false (rather than evidence of some manipulation or false sensory perception).

Plato offers the Philosopher as the solution to this intellectual paralysis and dysfunction. The modern equivalent of this is the Bayesian logician, who stands in stark contrast to the Frequentist. The Bayesian considers all the other evidence for gravity and almost without thought rejects any experiment in which the ball falls upward. The Bayesian also updates prior knowledge as new knowledge comes along and considers that evidence’s strength. The Bayesian never considers just the data before her; the Bayesian understands that facts never “speak for themselves;” the Bayesian walks out of the Cave and keeps learning.

Bill Nye might be right about climate change, but he is still chained to the wall staring at shadows on the cave; he is chained not by physical shackles but rather by the intellectual paralysis of scienticism.