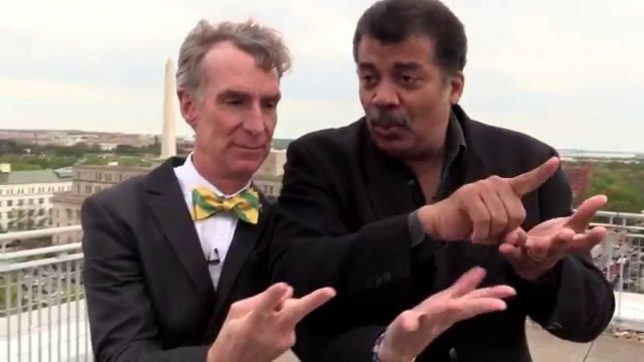 If scientism is a new religion, then people like Bill Nye and Neil deGrasse Tyson are it’s high priests. They rhetorically slay the adversaries of science by invoking the unassailable authority of science itself and foster a belief in its inerrancy. They are religious zealots of this new religion. Both are famous for issuing quips and responses that feed the salivating crowds of those too captivated by science, but which do little to persuade an adversary. This type of rhetoric in ineffective at least, bullying in the average case, and dangerous in the worst case.

Take, for example, this quote from NDT:

The good thing about science is that it’s true whether or not you believe in it.

Too often this sentiment is used as an argument-ender. Of course, to end an argument this way is a logical fallacy. The argument hinges upon its merits, not whether one side or another appeals to the authority of science. Just because something is believed by a famous person, a majority of persons, a famous scientists, or even a majority of scientists, does not make that thing true. It’s a shame that this dismissive quotation from NDT is used smugly by so many to end arguments and make themselves feel self-righteous in the process. But apart from the logical fallacy that such a quote is used to establish, the statement itself is nonsensical.

Science itself makes no such claims about truth and epistemology as this quote would imply. A better statement might be that whatever is true is true whether we know it or not, or whether we acknowledge it or not. But it is the height of human arrogance to assume that we know the truth on any given matter, and that “science” as a process claims for itself the power to determine what is true and what isn’t.

A fundamental tenet of science is that every scientific theory is open to falsification as new evidence arises and therefore no theory is ever considered certain (“a fact”) due the concept of fallibilism. Science is a search for truth, but it is not truth itself. This not-so-subtle difference distinguishes Science from the pseudo-religion of Scientism. Science does not claim ever to be “true.”

Some will distinguish between a hypothesis, a theory, and a law. Hypotheses are basic guesses to explain observations; almost all hypotheses ever generated are false. Hypotheses are tested, refined, retested, etc. and form the basic work of all scientists, physicians, criminal investigators, or pet-owners (whose poop is that?!).

Eventually, some hypotheses will be well-enough supported by data to form a theory. When a hypothesis becomes a theory isn’t quite clear; but, in general, theories are widely-supported by available data and by relevant experts and scientists. This does not mean that such a theory is “true,” it merely means that it’s the best idea we have. Theories are added to and expounded upon, and occasionally, they are displaced and proven wrong. The theory that the the sun and the planets revolve around earth was truly a theory by all definitions, but it was wrong. Good science makes no claim of facthood for theories.

Then there are laws. Laws are accepted as true, but there are very few laws, and they usually are mathematical relationships that are consistently and without exception represented universally in nature. A law states that something happens given a set of circumstances, but not why it happens. Gravity, for example, is a law, but why gravity happens would be a theory. Since laws are just observations (not explanations), they really cannot be disproven, but they are sometimes refined due to better observations or better instruments or better measurements. For example, Newton’s 2nd Law of Motion (F=ma) was a result of countless and consistent observations, all of which agreed with this law. But eventually, we found the law did not hold true at relativistic speeds. This did not disprove the law, but it did limit the law (it was true for observable data). This is important, because too many times in science, we extrapolate something to be true where no empiric data exists based on what we have observed. In the case of Newton’s Second Law, this turned out to be wrong. Similarly, just because Newton discovered a law about motion doesn’t have anything to do with the veracity of his theory of motion developed to explain the law.

How many hypotheses that we generate turn out to be false? Virtually all of them. This makes sense; since there are an infinite number of hypotheses which can be developed to explain observations, almost all will be disproven once the scientific method is applied. This is the purpose of the scientific method: to disprove bogus hypotheses (remember this next time you read a paper which claims that the alternative hypothesis is true just because the null hypothesis was disproven).

How many scientific theories are eventually disproven? Most. This is the story of science. The Greeks, for example, had scientific theories explaining almost all aspects of our world. How many of those still appear valid to us? Almost none. Are we any smarter than the Greeks? No. It is safe to assume that most scientific theories currently held will be either wholly disproven or will be in need of copious revision and addition. This is one of the pitfalls of Scientism: it assumes that we are just smarter today than those who came before us. Every generation in history has made the same mistake.

How many scientific laws will be overturned? A few. Most will be limited or made more precise over time, and a few will be superseded.

The hallmark of a great scientist is a healthy skepticism that leads to challenging even the most fundamental beliefs. There is nothing in science that shouldn’t be rigorously challenged. Those challenges only make our confidence in given theories or laws stronger when they are unsuccessful, but occasionally, they lead to scientific revolutions.

Thus, any rhetoric that belittles thoughtful questioning of science is not constructive. Dogma is the enemy of true science. A good scientist is always asking herself, “How can I prove myself wrong?” Bad scientists create personality cults that pander to their followers by denigrating anyone who has not sworn blind obedience; that is called Scienticism.

As a religion, Scientism establishes its authorities, and those authorities often offer philosophical beliefs to others as if they are scientific truths. Many scientists believe that philosophy itself is just a construct; they fail to understand that science is a mere construct of philosophy! To conduct science requires a belief about epistemology, ontology, and countless other philosophical idea.

The natural world is a package deal; you don’t get to select which facts you like and which you don’t.

Well, actually I do. Science requires me to do this. Science tells me that most of the beliefs strongly held by Bill Nye as true will someday be disproven. Note well that I am not saying that I disagree with Bill about any particular area of science, but I will say that both Nye and NDT pervert science in their zeal to establish its dogmas too firmly and unquestionably.

Think of it: most things that science tells us today are “true” will be disproven in time. I love used book stores. I love old books. Perhaps what’s most fascinating to me about them is how wrong nearly all of them are (at least wrong compared to what I know to be “true” today). It doesn’t even matter the subject area; they are all just junk. Browse through the best-selling nonfiction books of, say, forty years ago. How many of those books, which sought to be revolutionary and important, contain ideas that we still consider revolutionary and important, or even true?

Three best selling diet books of the 1970s were The Atkin’s Diet, The Pritikin Program for Diet and Exercise, and The Complete Scarsdale Medical Diet. All three claimed to be consistent with the latest scientific evidence of the time. For example, The Pritikin diet cited literature from scientists at UCLA which claimed that following the diet would dramatically alter the course of heart disease, type 2 diabetes, obesity, high cholesterol, and hypertension. The plan was not without merit (it asked you, for example, to exercise for 30 minutes about three times a week), but its dietary claims, given our current data, were all false. The same can be said of the Atkin’s Diet and the Scarsdale diet, both of which advocated for low carb and low fat diet intake. The belief in a low fat diet was common in the 1970s and was the prevailing scientific advice of almost every interested party. Today, we know that public health recommendations that we eat low-fat diets contributed, in large part, to the current obesity epidemic.

Herein lies the problem with public policy built on faulty science: just because it is science doesn’t make it true. Science is really a history of mistakes, dead-ends, and wrong directions; a healthy skepticism of science is needed to prevent the low-fat diets, thalidomides, and other excursions from actual truth from harming us and our patients.

The unquestionable pronouncements of scientific fact from people like Nye and NDT are harmful and give the wrong impression to the next generation of scientists about what science is and what its limits ought to be. Newton said,

Newton’s point and mine are the same: Science is not truth; don’t confuse the two.